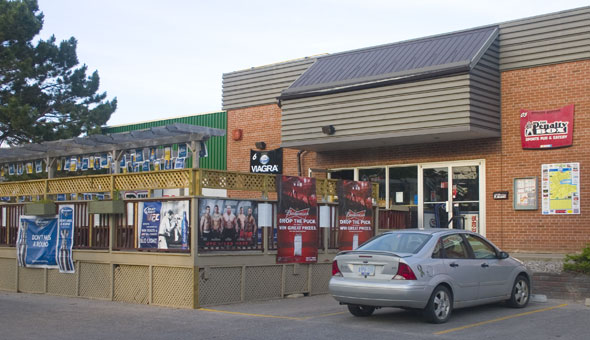 About The Penalty Box:

The Penalty Box Sports Pub and Eatery are located at 220 Bayview Dr. near Little Avenue east of Fairview Rd. in the south end of Barrie with a large patio and friendly staff.

The Penalty Box features a large patio out front, a games room available for events, and sports on ten big-screen TVs seven days a week. Karaoke Night is every Saturday from 8 pm to midnight.

Tucked behind the trees that line Bayview Drive in Barrie, The Penalty Box is a self-described ‘hidden gem’ located in the heart of the city’s hockey community. Situated in a somewhat run-down retail park just west of the forests and trails of Lackie’s Bush and a mile south of the shores of Kempenfelt Bay, this sports bar and restaurant recently changed owners in 2017 with its new proprietor looking to improve the existing menu, service and overall atmosphere of the premises.

The squat, redbrick building is a little uninviting from the outside, but inside boasts more than ten large HD televisions showing multiple sports channels, and is roomy enough – it has a lounge, a spacious bar area and external wood patio with pergola and a selection of seating – to cater for families, sports teams and other large gatherings. The décor is a typical sports bar, with the televisions mentioned above, plenty of neon, and a giant scoreboard behind the bar. Some online reviews describe The Penalty Box as noisy, even when there are few people inside the venue, usually because of the high volume from the televisions or the music being played. Online reviews mention the following pros and cons:

The Penalty Box’s menus have been overhauled in the last year or so, and many tired, boring items have been replaced. The menu itself is divided into hockey-themed sections, such as ‘First Period’ and ‘Overtime’, and the choice is broad with a host of favourites available. For example, from the ‘Second Period’ (the salad section) patrons can choose from Caesar to Greek salads with myriad toppings and dressings, while the main courses (‘Third Period’) offers up classics such as pulled pork, chicken tenders and chicken parmesan pasta. Home-made burgers, pizzas and poutines are also available, as are a variety of ‘shareables’ (large platters for people to share, such as nachos or ‘Penalty Box Fries’) and desserts, such as deep-fried berry cheesecake. The star of the show is their speciality jumbo chicken wings, available with a variety of sauces and dusts and described as ‘Barrie’s biggest wings’.

Online reviews are favourable for The Penalty Box, particularly since the new owners arrived, however, one TripAdvisor reviewer complained that even after the revamp there were still problems with availability (in this case, a portion of fish and chips) meaning they left without eating. While most Google reviews are positive, one or two recent entries describe the food as slow to arrive – forty-five minutes later for some chicken wings, for example – and the food can occasionally be ‘sub-par’.

The Penalty Box is open Monday to Sunday to either midnight or 1 am on the weekend, and offers karaoke every Saturday night between 8 pm and 12 am, a ‘live jam’ music night every Thursday, while ‘Daily Deals’ such as a pint and quesadilla on a Tuesday are available throughout the week. Home delivery is also an option, where you can ‘Skip the Dishes’ with 50% off chicken wings Mondays, Wednesday and Saturdays, and patrons can book a buffet or sit-down dinner for large groups or sports teams, where if you bring your team photo it will go on the restaurant’s ‘Wall of Fame’.